The Celtic nations are territories in western Europe where Celtic languages or cultural traits have survived. The term “nation” is used in its original sense to mean a people who share a common identity and culture and are identified with a traditional territory.

The six territories widely considered Celtic nations are Brittany (Breizh), Cornwall (Kernow), Wales (Cymru), Scotland (Alba), Ireland (Éire) and the Isle of Man (Mannin or Ellan Vannin). These together are commonly referred to as the “Celtic fringe”. In each of the six nations a Celtic language is spoken to some extent: Brittonic or Brythonic languages are spoken in Brittany, Cornwall, and Wales, while Goidelic or Gaelic languages are spoken in Scotland, Ireland, and the Isle of Man. 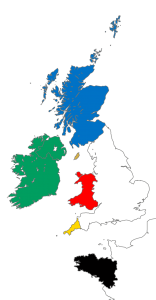